From time to time when traveling, I meet people who would benefit from a good, German bank account (for example, one at the DKB). This is the first of a small series of articles on this topic. 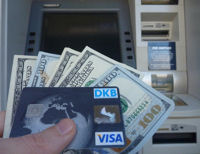 The solution is the DKB Visa Card and free ATM access!

I met an elderly man in California, we’ll call him Rod. In 1962, Rod emigrated from Germany and has now acquired American citizenship. A few years ago, he inherited his parent’s house located in a city in Southern Germany.

This house has been occupied by another family for many years now which generates rent income. An account was set up at the “Postbank” for this purpose. Each month, the rent is paid to this account.

However, because of the expensive transfer fees, Rod always waits a while as the income from rent accumulates. He only transfers money to his American account once or twice a year. After all, he has to pay the Postbank international transfer fees, as well as incoming payment fees to the American bank. Plus, his American bank sadly doesn’t exchange the money at the best rates.

When I told him that I know of a bank that would provide him with all of that for free and that he could withdraw the rent any time he wanted to at an ATM in California, Rod’s ears really perked up. Being retired doesn’t exactly leave much room to hand out fees!

This is how the plan looks in detail:

Rod applies for a DKB Cash account online. He visits Germany every or every other year, but wouldn’t have to in order to open the account. Soon after applying online, he receives an e-mail that explains different ways that he can prove his application as legitimate, or, in other words, prove his identity.

Another alternative would be to identify oneself at any time using the postal identification method in Germany, at the Airport, for example.

He chooses to confirm his identity through his local bank since he has a trusted relationship with them. That doesn’t cost him a thing. The DKB would even be willing to pay for the expenses of an identity confirmation through a lawyer or notary.

Phone call from the DKB

Even before Rod receives a written confirmation of his account being opened, he gets a friendly phone call from the DKB. Rod is happy to have the opportunity to speak German. The conversation only lasts a few minutes and the employee from the DKB assures him that his DKB Visa card will be sent to him in the mail within a few days. And it really doesn’t cost anything!

Sure enough, Rod receives the following separately in the mail a few days later: a welcome letter with his account number, access to his online banking account, and the DKB Visa card.

He gives his new account number to the people renting his house. As of now, the rent goes directly to his DKB checking account.

Now he goes to the ATM with his DKB Visa card twice a month and withdraws 500 dollars. Rod is happy.

Summary: What did Rod pay for?

The ATM at his local bank merely charges 3 USD per withdrawal, which is common in the US. The DKB would even refund those fees, as described here. But Rod says “live and let live” and hasn’t used the advantages of this offer thus far.

He is pleased that the DKB provides him with such an elegant way to transfer his rent income from Germany to the U.S. free of charge.

The idea of withdrawing the rent using the DKB Visa card at ATMs is ideal!

To increase his interest income (there are better interest rates on the Visa account), Rod could make sure the rent is automatically transferred to his Visa card at the end of the month, or after it arrives on his account.

If he doesn’t, the Visa card would go in the red at zero interest, and the amount would be charged from his checkings account once a month. The account balance is settled through the DKB, this way there are no interest costs on the Visa card.

22 Responses to “DKB: withdraw rent for free while abroad”