There are so many (free) bank and credit cards in Germany and other European countries. Which should you take with you on journeys or for the everyday use?

Which card should I take with me today?

The wallet becomes fatter and fatter. Now we add the questions of whom can I trust my card data? Do I want to submit my card data to every merchant online as well as offline? 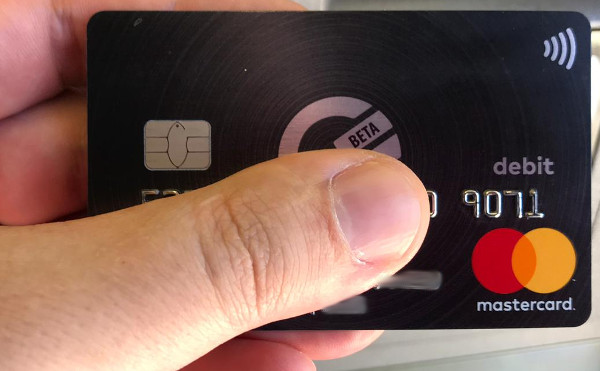 Although free of charge and filled with many advantages: A sofisticated design!

Curve as my new powerful tool!

Now the Curve Card comes into play, a powerful tool. The Curve Card in connection with the Curve App is able to solve quite some problems. You only need the Curve Card, which is even free of charge, and have so-to-say every credit card with you. How does that work?

Curve Card is free of charge!

In the Curve App, you add all the credit cards of your choice. They are also legitimated there and this is a one-time procedure. Afterwards, you can choose in the app with which card you want to pay. In real-time, just choose the card from which the money should be debited.

Now this has a number of advantages:

“Firewall” for the own card portfolio

Never again have I paid with the wrong credit card
Super-practical for the retrospective division between private and business expenditures!

In this day and age, it is really a good thing to have several credit cards. Each has its advantages, one submitted different limits.

But from my point of view, the disadvantage is that you have to have all these cards with you. This problem is solved with the Curve Card. Moreover, all transactions run through one app, which is very nice and comprehensible. Whenever I want to redirect a transaction retrospectively to another card, I can do this too.

The Curve Card is a debit Mastercard with NFC chip. So contactless paying is no problem either.

I have the old variant with the old Mastercard logo and embossing. The new Curve Card is flat with the new Mastercard logo and looks a lot more sofisticated. The embossed cards will disappear anyway, knowing that there are almost no imprinters anymore even on the African continent and cards globally switch to the sole electronic use.

The advantage that the Curve is a NFC card includes that also the cards, which do not have NFC, can be converted into a NFC card. Especially in Germany, there are still one or the other credit card that does not have a NFC chip.

With Curve, every card becomes NFC-able!

The other point that I also consider very important is that you still cannot change the PIN of many credit cards, e.g. at the DKB and Barclaycard. However, by using the Curve Card, I just have to remember one PIN, the one of my Curve Card.

Only one (chosen)PIN instead of a mess of numbers

What does it cost and how does Curve earn?

The best thing about it: It does not cost me anything.

The Curve Card is free of charge.

Why? How does it work?

Curve earns through the transactions and is issued as a business card. Curve earns, whenever I pay with it, but it does not cost me anything at all. And this is what we love to hear.

When using the card in a foreign currency, Curve charges 1 %. Of course, such a use should be avoided in non-EU countries. However, this is not a problem for smart bank customers.

There is also a black card variant, which looks more sofisticated and costs a one-time fee of Euros 50. This one gets more Curve Rewards per transaction, this is the proper point system of Curve. I won’t describe it here, because the advantages of Curve are rather in the mentioned features, than in the point system.

If you are new to Curve, then you gets limits in order to prevent fraud. 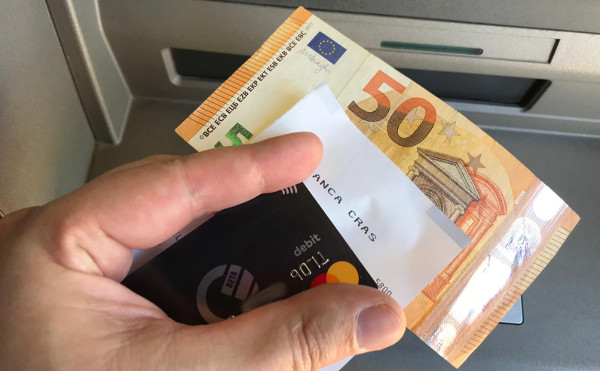 With Curve, one can withdraw cash free of charge at banks, where it otherwise would not be possible!

One can withdraw cash with the Curve Card at ATMs.

Currently, Euros 200 per month are free of charge.

At the chosen card in the app, this transaction is booked as an online transaction. You would get flight miles for a cash withdrawal, which normally would not apply.

If you withdrawal more than Euros 200 per month, then it costs 2 % of the transaction, if it is a credit card. This is not meaningful.

At debit cards, it is free of charge and the system recognizes by itself, whether it is a debit card or credit card.

At the order, you are asked for the base currency. I have ordered the card as a Euro-card. At the submitted cards, it is also asked for the card currency. You do not have conversions and costs with it, even if it is a London card. 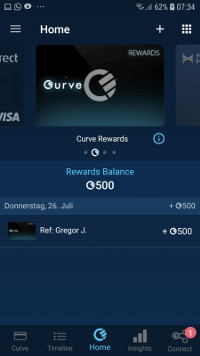 All cards in one card and one app!

The app sends you a push-notification at every data use. With this, you also get a notification, if the corresponding card in fact does not even have this feature, such as the DKB Visa.

Push-notifications also from cards that normally cannot do it!

You also have the option of adding notes or pictures to every transaction or you can request a bill by e-mail with all the details too. Very well solved.

Every transaction can be assigned to different categories, for example shopping, health, dining, etc.

I have already mentioned it: The big security advantage is that the merchant never gets the true card data.

Neither are they safed in the app, when you enter them initially, but are encrypted according to the bank standard and end-to-end transferred to Curve. Moreover, Curve has an extra-security system, which monitores the card use.

In principle, the use of the Curve Card is another kind of security action when paying. One can block the card in real-time within the app and the customer service is available 24/7.

My personal conclusion about the Curve Card

Altogether, the Curve Card is no further credit card. It is a debit Mastercard and has to be regarded as some kind of a Swiss pocket knife.

You take it with you and can take advantage of several cards.

All this is very comprehensible through the app and the merchants never receive the true card data. This provides further security.

I have determined that the e-mails are answered very fast, according to my experience within a day. The reliability is very high, I did not encounter any problems yet, not even in hotels or when renting a car.

The Curve Card is a type of “jeans-card” for me, as I only have to put it in my pocket and have all the other cards with me and I only have to remember one PIN.

As it does not cost me anything at all, neither when ordering nor paying, I did not have to think twice. With a little phantasy, you can make a lot out of it, especially through the feature of assigning card transactions retrospectively to other cards.

I would be glad to answer questions about the card …

… as far as I can from my own experiences. Please use the comments feature! Other smart bank customers are also welcome to join the written conversations. I am looking forward to the experiences of other card owners. Many thanks!

Conversation between the two portal operators blackwater.live* and DeutschesKonto.ORG about Curve:

Due to the fact that our guest author is currently in Italy, the conversation has been recorded through a data connection. Perhaps this is the reason for the lower audio quality than usual.
Curve Card » order for free
Due to good contacts to Curve, we can forward to smart bank customers, what not many people already know:
Since the last update, the foreign transaction fee at card use has been cancelled.

*blackwater.live is operated by someone, who works full-time in a bank and therefore, does not want to be mentioned by name.

7 Responses to “Curve Card ► All in One”