We have created this detailed overview of the overdraft facilities for and with the help of our Sunday mail subscribers. It is a supplement of our three best current accounts. I personally use all three banks.

Below the comparison, you can find ideas, advices and experiences for an optimal setup of credit lines.

Who says that one can only have one overdraft facility?

Correct, it can even be very meaningful to dispose of several credit lines at different banks. Get inspired by this page!

Combination of DKB and ING-DiBa

My frequent readers know it: this is my absolute favourite combination. I use it by myself since many years!

How can I deal with two overdraft facilities?

Very simple: at one bank, it is necessary to have an actual salary transfer to the current account (DKB) – at the other one, the proof of salary is enough (ING-DiBa).

Take advantage of this difference and open both current accounts (if not yet done, both are free of charge) and set them up as follows: 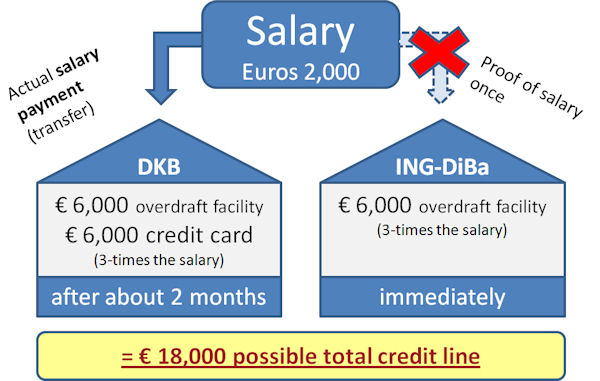 Example with a net income of Euros 2,000, as well as such a good creditworthiness that the maximum credit line of 3-times the amount of the salary can be granted.

Arrange to transfer the salary to the DKB, submit the proof of salary at the ING-DiBa

The beauty of it: when you set up this system of credit lines at both banks, then these will remain. Even if you change your salary transfer to another bank or become unemployed and do not receive any salary at all.

However, you can cause an increase of overdraft facility on your part. This is meaningful e.g. if you got a huge salary increase. Otherwise, I would not change it, because at an overdraft facility change, the creditworthiness is rated again.

Overdraft facility is set up permanently and does not change at a lack of salary (e.g. unemployment)

However, the time of unemployment is not good to apply for an overdraft facility. This should be done before. Please do not forget this, if you want to make a professional change and set up the according credit lines beforehand.

Whether you use them later on or not, does not matter today. At a later point of time, it may not be so easy to get a good overdraft facility!

Change current account in spite of overdraft facility in the red

Yes, this desire often appears in people, who have to pay the monthly account management fees, eventually also extra fees for bank and credit cards. Then, one regularly uses the overdraft facility and asks oneself:

Why should I pay so many fees and interest?

Many Volksbanks and savings banks, but also other branch banks, have overdraft interest rates within a two-digit area. If there are further fees, it will be quite expensive.

Unfortunately, some people think that they have to repay their overdraft facility first, before they can switch their account and postpone a meaningful account change month after month. Do you know such people?

In change, you use the overdraft facility of the ING-DiBa. But this is most likely much cheaper and you can save the fees for account and card too. 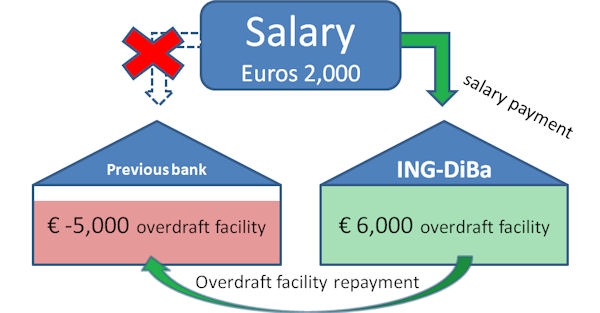 However, there are also people, who are generally satisfied with their bank and/or do not want to switch out of other reasons. But the current overdraft is so pushy, than one wants to replace it with a better solution.

Functioning of the credit line 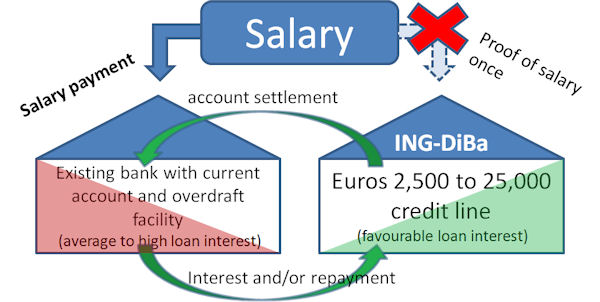 Among our subscribers, there are some top earners, where the three-times net income is more than the maximum overdraft facility limit of the ING-DiBa (Euros 10,000) and the DKB (Euros 15,000).

If a higher credit line should be available on the current account or on the Visa Card, then the Comdirect Bank would be an option. The Comdirect does not know a limit of the credit line given a good income and creditworthiness.

Theoretically, an overdraft facility of millions is possible

I must honestly admit: low overdraft facilities are immediately granted at account opening at the Comdirect – as stated above in the table. At higher amounts, the banks waits for the salary transfer.

Therefore, it happens that one gets an initial credit line first, which one can increase in the course of the business relationship.

Refinancing:
The smart way to get out of the overdraft facility

The refinancing through a favourable instalment loan is a proven way to get out of the overdraft facility.

The advantages are obvious:

One can often halve the interest burden through an instalment loan!

When concluding an instalment loan, the name of the bank does not really matter. One concludes the loan agreement and the instalments are debited monthly until the borrowed amount is completely repaid. The contract automatically ends with this.

Eventually, agreeing on a special repayment could be useful, if you receive money unexpectedly and want to repay the loan faster as planned.

The most important thing at the instalment loan is the interest rate. So that you get the currently most favourable interest rate, I recommend the use of the loan calculator.

If you are retired or research for a retired person, then please exchange the term “salary payment” with the term “pension payment”. Of course, an overdraft facility is possible at the above presented banks.

Does one always immediately get an overdraft facility?

No. People of our family and me too have immediately got an overdraft facility at account opening at the ING-DiBa and the Comdirect. This regularly happens, if the creditworthiness is good.

Is the overdraft facility entered into the Schufa?

Yes. Overdraft facilities are always entered into the Schufa together with the agreed credit line.

The Schufa or another querying bank cannot see, how “deep” one is unsing the overdraft facility or whether one is using it at all, because the actual account balance is not reported.

The comments box at the end of the page is activated for questions, ideas, feedback and experiences. 🙂

The creation and maintenance of such pages is quite a lot of work. We are happy to do it for “our” smart bank customers and are glad to answer your questions via the comments feature.

If our content has helped you optimizing your personal finances, then we would rejoice to be recommended by you as well as being rated with 5 stars. Many thanks!