Use the ideas on this page in order to gain a better life quality!

Before you find various strategies to solve problems in the second part of this article, we offer you instructions first on how to use the overdraft facility properly. Banks issue credit lines, but they only rarely tell their clients about the automatisms behind them …

… If you follow our tips, then 99% of all problems with an overdraft facility won´t even happen.

How to use an overdraft facility correctly:

An overdraft facility (Dispositions­kredit) is a credit line which was agreed with the bank and defines up to which point one may overdraw the current account (Girokonto). We also talk about overdraft credit (Überziehungskredit).

Most German banks provide their overdraft facility only if the customer’s salary payments (or other income) is transferred to the account.

German banks commonly grant an overdraft facility of 2 to 3 times the amount of the monthly salary or cash flow. Comdirect and DKB concede their customers with an overdraft facility whether they have salary payments or not. However, these credit lines range from Euros 100 to 2,000 – depending on the creditworthiness rating at the Schufa query (credit investigation company). With later salary payments, this can be increased, of course.

Use the overdraft facility only up to 80 %

In order to not get problems with the bank, it is advisable to use the agreed credit line only up to 80%, except sudden financial emergencies. However, you should reduce the volume of credit to a maximum of 80% as soon as possible.

A bank customer has an overdraft facility of Euros 5,000. According to the 80 percent rule, he should not slip lower than Euros 4,000 in the red.

Banks monitor the use of the overdraft facility automatically through computers. The severity and strictness, of course, depends on the bank. If the balance of the customer remains within the upper end of the agreed credit line, the account manager or the support team receives an automated message.

If the customer often or permanently exceeds the credit line, the banks perceive this as warning signals …

If the account manager knows the customer well and sees corresponding assets, such as a securities account or a fixed deposit in other accounts at the bank, probably nothing will happen. The bank earns quite well on loan interest. Maybe the bank even will suggest increasing the overdraft facility, because from the bank´s perspective, the customer can afford this debt.

If you do not have any other assets at the bank, and this is not an uncommon reaction, the bank will make a new creditworthiness inquiry at the Schufa. The bank has the right to do this as stated in the terms and conditions for current accounts.

If the creditworthiness rating of the customer has worsened in recent times, many banks almost automatically start the safety mechanisms to limit any potential loss through a necessitous loan.

As a customer, you can tell this when:

If you have already exhausted the credit line or slipped even deeper in the red, it is sometimes not easy to meet the demands of the bank quickly. Unfortunately, the banks often establish relatively short deadlines, in which the new account balance has to be achieved.

Especially through the reduction or cancellation of the credit line, loans become necessitous, because the account holder has been accustomed to live with the bank debt and the interest thereon is accurately calculated by the bank computer and the customer has to bear it. He/she has either paid the interest or the loan was increased by the interest owed, as he/she was already in the red.

Hence, a vicious debt circle can develop. Breaking this is also the motivation of the bank. Although not all banks cleverly employ it.

For decades, the price listings of German banks employed two different interest rates for people, who did not have enough money in the current account:

The interest on overdrawings (Konto­über­ziehungen) was significantly higher than the interest rate on borrowed money within the overdraft facility. This had an educational and partly deterrent effect.

In 2014, some banks started to unify the interest rates and this was due to the current low interest rate phase at the level of the lower interest rate. What consumer advocates (Verbraucherschützer) pleases, was misunderstood by some bank customers … as now there is apparently no difference whether one was staying within the agreed credit line or accumulated account debt beyond that point. The interest rate is indeed the same!

At first glance, it makes no difference whether you are within the agreed credit line or overdraw the account beyond that limit. A wrong signal for the customers. Source: Price listing of the DKB January 2015.

Remember the rule of thumb …

1. Determine the own creditworthiness

In order to start a successful negotiation with the current bank or another, it is not enough that one:

If one is customer of only one bank, the bank knows this information too. The bank, however, knows things about you that you probably did not know: your creditworthiness rating at the Schufa (credit investigation company).

Get your own creditworthiness rating of the Schufa

Do not expect that the bank provides you with the information that is available at the Schufa. The bank itself cannot see all the details. However, it can see whether you are customer of another bank, what credit lines were established there and if there were any problems in this area.

Moreover, the bank can see a credit score that expresses the probability that you will settle your bills or credit cards on time.

You will have to get this knowledge necessarily. This way, you can address creditworthiness problems and present solutions for them, or – and this also happens occasionally – correct errors of the Schufa.

Schufa query is free of charge once per year

A Schufa query (Schufaauskunft) is free once each year. However, there is also the possibility to obtain an online access to your personal Schufa-database paying a one time fee. This has the advantage that you can gain an insight into the data about you at the Schufa. 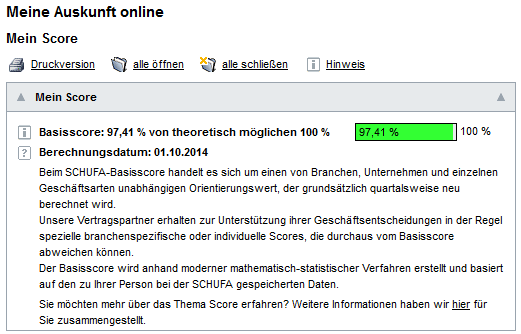 The Schufa-score is only the smaller part of the information. Further show the existing current accounts and loan relations.

2. Negotiate with the bank

Negotiate with your current bank (you will be more successful, if you know your creditworthiness rating at the Schufa). Find an consensual solution on how to keep the overdraft facility permanently below the 80% threshold.

Get another overdraft facility. This might sound crazy at first, but there are actually banks that offer such thing as an overdraft facility without current account. These products are called “Abrufkredit”, “Rahmenkredit”, “DispoPlus-Kredit” (OverdraftPlus-credit) or “Comfort-credit”, depending on the bank.

set up an additional overdraft facility at another bank

This works as follows:

You open a loan account at one of these special banks. At the same time, a maximum credit line is agreed. By the way, you do not have to consider the 80% rule here, as this loan account cannot be overdrawn and the interest is paid through a direct debit from your current account.

Once set up, you can use the loan account, but you do not have to. If the account balance is zero, then neither interest nor fees apply. Since you want to use it to settle your overdraft facility, you preferably agree already upon your application on a payment to your current account.

How this looks like in detail and which banks offer those separate overdraft facility accounts can be found on this page: ⇒ additional credit line.

I wish you great deal of financial luck and please let me know at the end of this page through the comment feature, if any of these tips was helpful. Many Thanks!