The DKB has been an insiders’ tip for free checking accounts with credit cards and free withdrawals at ATMs worldwide. That’s over on 30th of June 2014. 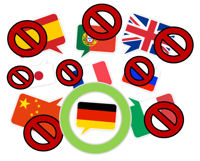 We never really understood why DKB offered their free checking account to the whole world. The only requirements had been for years:

But with a key ECB interest rate of 0.15 % and a lax lending policy by the European Central Bank there’s not much need for banks to collect savings from private individuals.

On the other hand DKB can hardly earn money with foreign customers while the deposit business is unattractive. The credit business is the most profitable business for banks apart from dicey speculation. But DKB does not offer loans abroad.

So almost all foreign customers cause DKB only expenses – for account management, the Visa card and withdrawals.

Foreign customers are too expensive!

Furthermore it was much more complicated to open an account for people abroad than for German residents who could use the PostIdent procedure available in every German post office. Outside Germany new customers had to confirm their identity with a lawyer or a notary.

It’s understandable that DKB finally lost its interest when customers from abroad also complained about the procedure for being too complicated or when when notaries refused to cooperate on the identification process.

It’s surprising that DKB stops accepting customers abroad just now that SEPA – the single euro payments area – has been introduced in all countries using euro as currency, removing all disadvantages of foreign accounts in respect of national account numbers.

In the past, the requirement to use the intricate IBAN and BIC numbers with international accounts lead to a preference for national checking accounts. Now that the IBAN is obligatory even for national transactions, it doesn’t make any difference whether the account is with an Italian, Spanish or German bank.

Why no European retail bank?

DKB could have taken the opportunity to develop into the first pan-European retail bank.

Their experiences with customers from every country of the world (except North Korea) would have been an ideal foundation.

Nevertheless, we respect DKB’s decision and reorientation. The bank seeks to acquire new customers in Germany and is going to extend their services in accordance with their motto “Hausbank im Internet”.

We will track this development and will report about it on this specialized web portal.

43 Responses to “DKB: No more accounts for foreigners!”