It has been claimed for years that one should not have more current accounts than absolutely necessary. In order to improve the Schufa-Score, one should even cancel credit cards. Even our portal was not free from it, as shown by this guest article of a financial journalist.

In the past years, feedbacks from our smart bank customer community grew, stating that they have a first-class Schufa-ranking despite various current accounts and credit cards.

Now one of them has provided us with his detailled self-query: 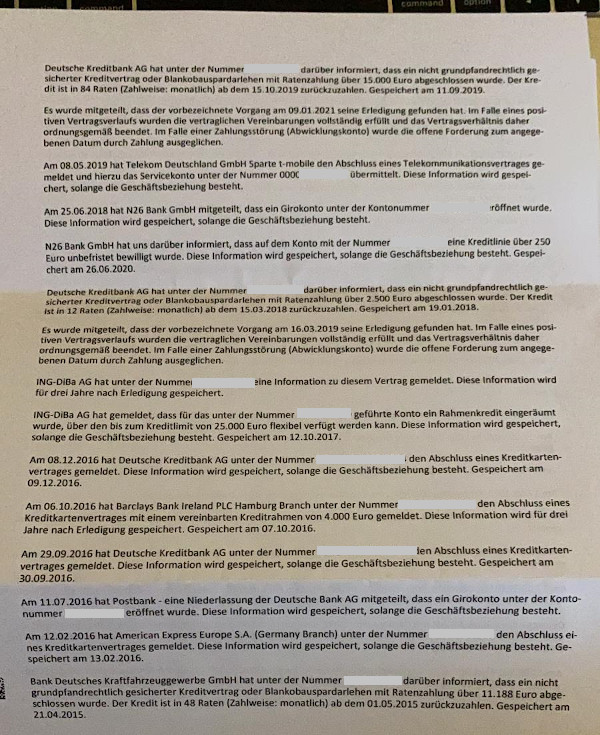 In total, we were provided with 10 pages for evaluation.

Additionally, there were 13 banks with the query “Kredit Konditionen” (loan conditions) entered, which derived from a loan calculation by Smava. As this entry is regarded as creditworthiness-neutral, we will not further deal with it in this article.

Which cards and accounts are entered in the Schufa?

Who does not want that can focus on the few Schufa-free providers (current account, loan).

a) Credit cards of our smart bank customer

According to the current concept of most financial advicers, the Schufa-score should be miserable, however, it looks great:

No, the score has improved by the number of accounts!

One could assume that when taking the calculation of the score-value from the year 2017 as a base:

Schufa-score 4 years ago (with fewer entries).

I know that some of us are observing the development of the own Schufa-score and I am asking you to report about your observations using the comments feature.

In my observation, I found it interesting that my Schufa-score improved after taking loans or setting up a bigger credit line. I documented about it in these articles back then:

The score did not get worse afterwards. Here you can see a graphical illustration of the past years: 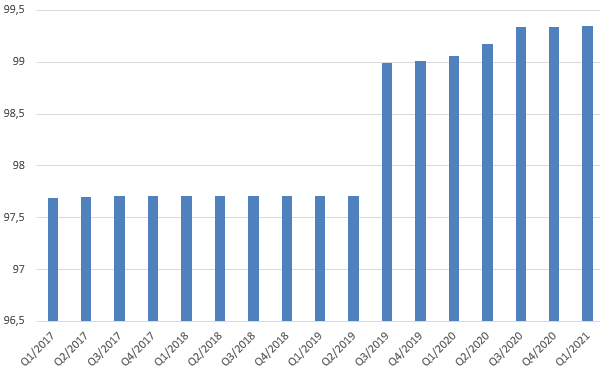 Currently, my basic-score is at 99.35 of mathematically possible 100:

Just like him, I was not among the people that only had the absolutely necessary number of accounts and cards.

Don’t let “advisors” tell you to limit your financial power to the absolutely necessary!

What cards and accounts do you have?

I am looking forward to the exchange through the comments feature and thank you for your dedication!