Some of them bear the potential to contribute that you will use the account even more effectively in the future. Take the self-test and write me via the comments feature, telling me how many points you have known. Thank you! 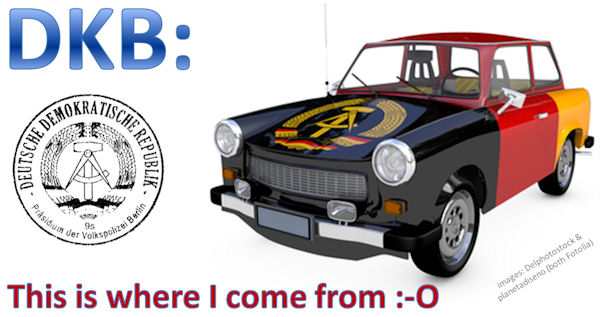 1. The DKB-roots are in the GDR

It is almost unbelievable, but true: The DKB was established as the first private bank in the German Democratic Republic (GDR) on the 19th of March 1990. One of the founding fathers was Edgar Most, who was the vice president of the GDR-state bank.

Likewise, a lot of founding capital from the GDR-state bank flew into the DKB, which led to the fact that the bank passed into the hands of the Treuhandanstalt (Trust agency).

In 1994, the fate and the ownership of the bank was in the hands of the Federal Ministry of Finances, up to the time when the DKB was sold to its current owners, the Bayerische Landesbank (BayernLB).

From the GDR-state bank to the Bavarian Government Bank!

During the financial crisis, shares of the BayernLB have been moved first in favour of the free state of Bavaria and then again in favour of the Bavarian Savings Banks Association. Today, the distribution is 75 per cent Bavarian and 25 per cent savings banks … until it will lead to a privatization in the future. This was already planned several times, but repeatedly postponed.

All the previously mentioned last 15 years had no influence on the private customers of the DKB. However, the DKB stands out as one of the most conditions-stable banks in Germany!

2. No branch offices, but subsidiaries

The DKB is a direct bank and does not maintain branch offices for the private customer business. The customer correspondence is done via online banking, telephone, e-mail or letter – you know that!

On our special portal, you will find a list of the DKB-owned deposit machines. There, you can deposit free of charge up to Euros 14,995 of cash per day being a DKB-customer.

All these machines are housed in DKB-owned buildings and they are located (except in Dresden) in subsidiaries of the bank. If you take a look at the map, you will find that they are only in East Germany and in Berlin. This is a “heritage” from Point 1.

Except the postage-free sending and the use of the ATMs, there is no service function for DKB-private customers.

Deposit machines only in East Germany

3. And yet there is one “secret” branch office

Accidentally, Alexander Hilbert, one of our frequent readers, discovered a “secret” DKB branch office during a walk through Munich!

The branch office is located in the building of BayernLB. Many employees of the Bayerische Landesbank have their private current account at the DKB. In the end, it is absolutely free of charge and offers excellent conditions and as a reader of our portal, you know that it is one of the best banks in Germany!

Moreover, the BayernLB does not provide private current accounts. The DKB-counter in the BayernLB is open to the public. You can perform fee-free cash deposits also beyond the maximum limit of the machines, and exchange and deposit even foreign currencies (varieties).

You can find details about that in a Guest post by Alexander Hilbert (article in German-language).

The classic case is the single account to which one can get two free Visa Cards. One can be used as a credit card to spend money, and the other one as a savings account (DKB Visa-Sparen). You can read about how to apply for a second Visa Card here.

Now, it is so that you can get a joint account with the spouse or another person additionally to the single account. Here again, each account holder can get two Visa Cards. This applies, however, if the first card is actually used. If the first card is not used, the bank will not issue a second card. Finally, each card costs money, even if the DKB bears the costs for the customer.

At a clever account set up, a married couple can get 8 Visa Cards plus 4 Girocards. Who does not need single accounts, can only open a joint account.

A joint account can also have more than two users. 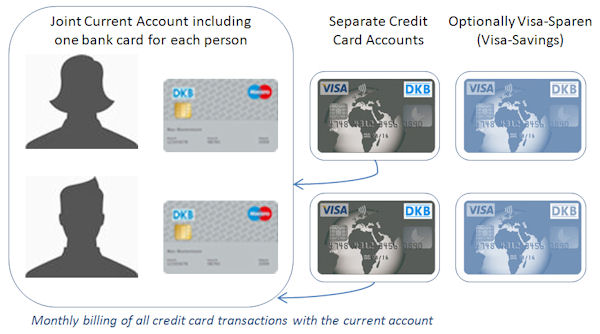 Germany’s favourite miles-collection program is Miles & More of Lufthansa. Since Lufthansa itself is not a bank, the card accounts must be managed somewhere else … and Lufthansa has chosen the DKB.

All Lufthansa Miles & More credit cards are managed at the DKB and since the DKB itself does not offer a “Gold Card”, one could almost say, “Just take the Miles & More card, if you want to have a credit card with additional services“.

Here you can find an overview of the offered cards: Miles-and-More-Karten.

Miles&More is virtually the Gold Card of the DKB.

One is already used to the fact that one does not have to pay any fees for withdrawing cash at many good credit cards … however, a refund of foreign fees, which may incur at a withdrawal abroad (especially USA, Thailand), is an absolute rarity.

The other German bank, the Comdirect, has cancelled this customer-friendly service on the 16th of February 2016. At the DKB, this refund option still applies and if we customers use it meaningfully, it will remain this way.

How the refund works, you can read here: DKB refunds foreign fees.

Just in February, I received a refund of US-Dollars 5.

7. Only one year with loss

Although the main product “DKB Cash” is free of charge with the numerous cards and the DKB even refunds the fees of other banks (see point 6), there was only one single year of loss in the company’s history.

In the financial crisis year of 2008, the DKB made a loss of Euros 21 million, but at the same time, it won the same amount of new private customers, as in previous years. Especially in the time of financial crisis, people reflect on real values and searched specifically for safe banks.

As a bank that is virtually state-owned (free state of Bavaria), which is one of the most successful states regarding finances, many people found a new home for their current account at the DKB.

They deposited savings balances above average at the DKB, as seen in the next point.

Currently, there are around Euros 47 billion in the customer accounts of the DKB. The savings account with the most popularity is the DKB Visa-Sparen.

Explained simply: The credit card account works like a call money account. One can deposit and withdraw money at any time. The current account is the reference account. The interest rate in recent years was always well above the average, but never at the top. DKB does not want to be a bank, where people only open an account because of the call money interest rate.

The interest is credited monthly. Additionally, you can increase the overdraft facility through transfers to the credit card account.

At the DKB, there is no minimum age for an account opening. So my own daughter became already a customer of the DKB within the first week after her birth.

As children cannot open an account by themselves, parents can do that for them up to their 18 birthday. The application is quite simple through the online banking of the parents. You can find more information about this subject here: Open a Junior-account at the DKB.

For the legitimating of my daughter, I only needed to submit the birth certificate.

My daughter then also got a free Visa Card, which we use as a savings account. Later, when she is older, she can take the Visa Card on a school trip, which is very convenient, because she will be able to withdraw cash free of charge everywhere on earth.

10. North Pole? Account opening possible from around the globe

Of course, the DKB focuses on winning customers in Germany and offering them the best possible banking services. Although, it does not advertise it, you can also get the free current account in Germany relatively easily with a place of residence in Austria or Switzerland!

From farther abroad, it has become a little more difficult. There was a time, when almost everyone was able to complete the account application correctly and to get a DKB bank account in Germany. No matter in which country he/she lived. It only mattered to do the legally secure legitimating (statutory).

But what good are many accounts for a bank, if they are not used or only used to withdraw cash abroad? This is expensive for the DKB and endanger the condition concept for all DKB customers.

Currently, it applies that only German citizens abroad – by that I mean people, who can legitimate themselves with a German passport or ID-card through the WebID-procedure – have a real opportunity to open an account.

Place of residence does not matter, if you can legitimate with a German identification document

German citizens abroad have to fulfil the same creditworthiness criteria as Germans living in Germany. That means that if someone can live on Euros 450 per month in Thailand, it is hardly enough to open an account. Although the DKB does not stipulate neither a minimum income or salary payment, but it checks the income and creditworthiness rating at the Schufa & Co during the account application.

You do not have to use the account immediately in full. It is often true that many people have become customers at the DKB, because of the free credit card with the fee-free cash withdrawal option.

First, they have transferred balance to the credit card account in order to increase the credit line. Then they have taken more and more meaningful services of the bank and used them until the DKB became the main bank account and the overdraft facility developed almost automatically.

Through our special portal, we know a huge number of people (emigrants and expats), who successfully opened an account at the DKB from the remotest parts of the world and were very happy with their decision. 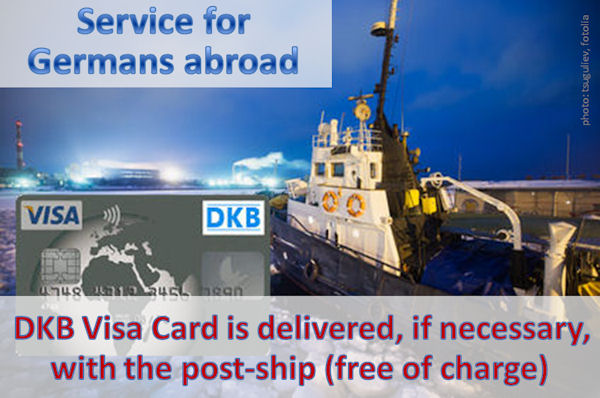 You should embrace these pages, if you are a DKB-customer: