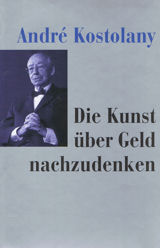 André Kostolany, one of my role models from my youth, said:

Yes, our financial system is a fraud – but a damn good one!

He did not see – during his time – any better alternative.

Are we more evolved today?

The working title of the new version with which we will exchange our financial values in the future, is called “Quantum Financial System”. It should consist in “computer science” that cannot be manipulated.

Also other advantages sound perhaps like balm on the wounds of formerly tormented bank customers:

Thinking further: What effects will such a system have?

In the same context, regular business models with practical relevance will be challenged by us bank customers with a Quantum Financial System, because if there won’t be any fees for payments anymore, then Visa, Mastercard and American Express will have to come up with something. Their systems will probably be able to dock on the QFS – is it even meaningful to make business in an interest-free and fee-free system!

If someone of our readers has invested in shares of these companies, questions about the impairment of his/her investment arise … and again fear is created:

Perhaps it is better to hold on to the old system, so that everything will remain as it was?

How the future will look like, can I, being an investor, author and networker, perhaps only wish – but not know. We will write the future together or will let it be written for us. Depending on how active or passive we are.

If you take a look at what several “futurologists” write, then there is a high probability that more will happen according to the voluntary action.

For example, one will work in teams for a certain project and when this is done, new teams will be arranged, depending on the task. In some parts, we already have it. This will be even more self-determined after overcoming strong “employee rights” in some European countries.

Perhaps one can also make up the thought that there is a voluntary action as a collective, whether we cling on the old financial system that is repeatedly tinkered with new rescue packages or whether we are open for something new.

Apparently, the Quantum Financial System is already running in the background since some time and it ready for use at any time needed, if the old breaks down or gives back. Thanks to the worldwide digitalization, all accounts and payment flows are known around the globe!

Every individual could voluntarily give part of the old financial system back by exchanging currency (banknotes or account balance) with a material asset.

Of course, one can buy expensive collection watches or Oldtimers – but I don’t understand anything about it and it does not seem really meaningful for the general public. Even gold, the classic save haven currency in the paper money age does not seem appropriate to me for everyone.

But what about silver?

Doesn’t people say that silver is the poor man’s gold?

Wasn’t silver part of our coins, before it was exchanged by cheap metal, just like paper money?

Until 1974, the 5-Mark-coins in the federal republik contained 7 grams of fine silver. These would be worth Euros 5 at the time of publishing this article!

If you would exchange the coin as the old currency D-Mark at the federal bank, you would only get Euros 2.56. Not even mentioning that you were able to get a meal in a restaurant for D-Mark 5 back in 1974 and today, you only get a pizza from the freezer box at the discount store. 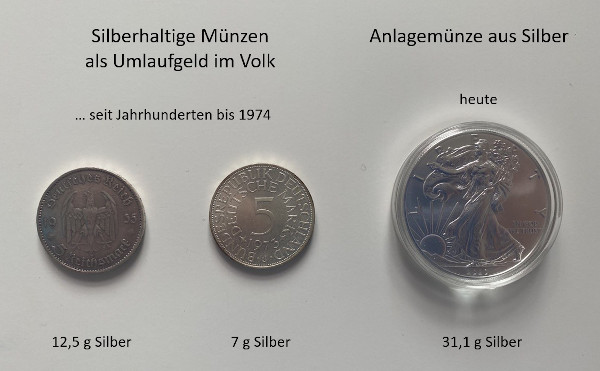 I particularly like the American investment coin “Silver Eagle”, because it says “Liberty” on the front side. Is it an embossed freedom compared to the debt money system?

In order to really give a part of the old system back, it is important to buy “physical silver”. That means: silver in the form of coins or ingots. There is a whole bunch of certified online shops that sell such investment silver and send it safely to your desired address. For example ► www.goldsilbershop.de ✅ 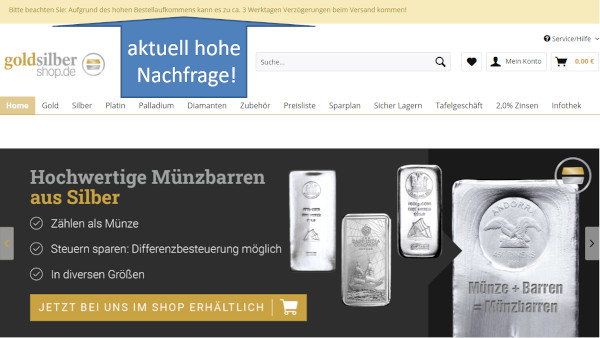 Every coin, every ingot, every gram of silver counts that finds it way back again into the family!

What to do at higher amounts?

At higher amounts, you can think of letting the physical silver be stored in high security vaults abroad (Switzerland, Canada, Singapur). I personally use this provider since years: 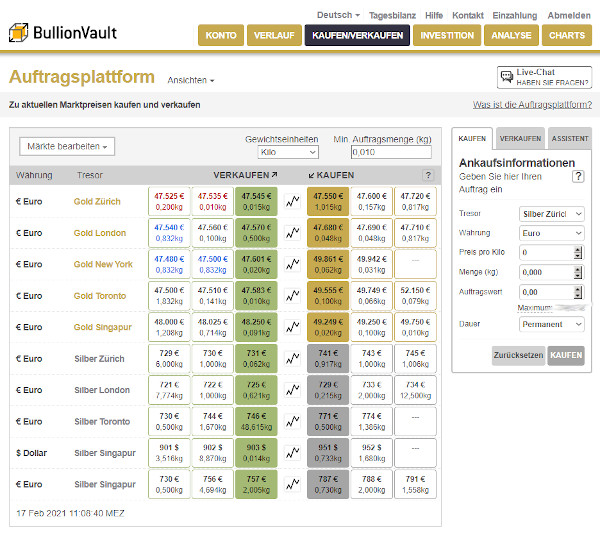 This is the market place (order platform) at BullionVault. On the right side, you can place purchase orders, for example at a certain price.

What do you think of it? What did you implement?

I am looking forward to read your ideas and success stories through the comments feature. Perhaps there will also be some pictures, just like the reaction to the article with the concluding idea that #silversqueeze is a bit like demonstrating against the establishment!

Please feel free to share this article. A hearty thanks!

Do you know about these subjects yet?