Most of our readers did not catch it or have only observed it a little. We will address this case in our Sunday-mail, because it could be pioneering for the future.

Performance of the share (A0HGDX) for the full year. Data source: Google.

Most private investors buy shares and leave them. Their gain consists in the regular dividend payments (when the companies distribute profits among the shareholders) and when they sell again at a higher rate.

There are players that “earn money” with other types of games, for example with the “short selling” of shares.

How does short selling of shares work?

In thought, it is borrowing a share and selling it. Of course, you have to give it back at a later point of time; this is why you have to buy it back at the market. If you buy it at a lower rate, then you made profits during this deal. If the rate rises, then the deal ends up with losses.

As a share can lose a maximum of 100 per cent in value, but rise several hundred per cent, this type of game is linked to a high risk.

The risk reduces, if you look for a company that is experiencing economic difficulties, and of course, if you “bet” on the case of the share together with others or due to its size.

In this case, in which we will take a look at the excuse of Trade Republic, some hedge funds have short sold shares of the company “Gamestop” according to several newspaper reports – and sometimes even more shares that there actually were.

If the company would have gone bankrupt, these players would have had to return the worthless shares to the lenders and the deal with profits close to their investment would be over.

Supposedly the group “Wallstreetbets” of the social-media-app “Reddit” initiated the call to buy shares of the company. 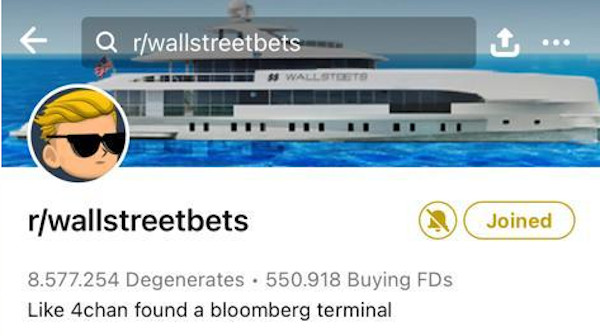 This group is public and everyone can join it.

This call did not only reach stock exchange players, but also computergame players (customers of the company Gamestop). Many of them bought a share perhaps for the first time in their lives, which is very simple and extremely cheap through the relatively new providers, such as Trade Republic. 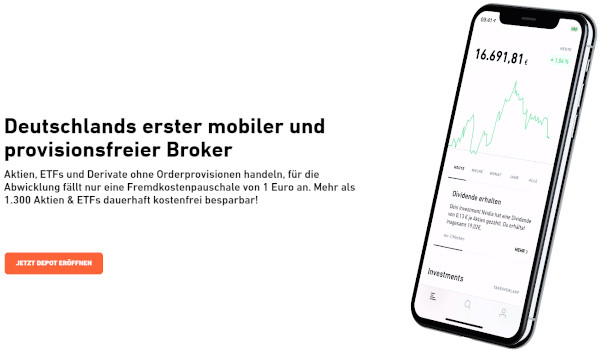 Trade Republic does not charge order fees nor securities fees. There is only a “lump sum of third-party costs” of only Euro 1 per trade. Savings plans are absolutely free of charge!

I do not know how many (new) private investors bought the Gamestop-share, as I do not have the professional tools. However, the share rose extremely high and the short-players had to start to buy the shares back from the market, which caused the rate to shoot upwards even more.

I have written above that you can make losses with the short-strategy, if you have to give the share back at a higher price.

Let’s assume that you bought the share in September 2020 for only Euros 5 and sold it for Euros 50 at the end of January. You would have multiplied your investment by ten!

On the 27th of January, the share left the deal with even Euros 267. This was the factor 100 of the cheapest rate for the full year.

Some people have to work for this amount for a whole year!

The amounts that a hedge fund normally invests, are significantly higher. Let’s assume that a fund sells shares for Euros 5 millions and has to buy them back for 50 million, then the loss is Euros 45 million.

In contrast to us private investors, hedge funds cannot just wait out such an increase of price.

The “hedge” actually is derived from “secure”, but in practice it means that one works with a high credit leverage and securities have to be deposited for such. The higher the potential losss, the more securities one has to provide.

If one cannot provide them, the “positions” are forced to be squared and one can be glad of only losing one’s full investment – in our example the Euros 5 million.

In extreme cases it can be that an emergency sale is not enough and one ends up having debts in the account instead of securities!

A hedge fund, Melvin Capital, apparently had to be taken over by another hedge fund in an “emergency operation”.

The magazine Fokus writes on the 2nd of February 2021:

Melvin Capital, one of the main investors of short positions of the share GameStop, had to be saved by other investors with US-Dollars 2.75 billion. Otherwise a bankruptcy would have been possible.

The bankruptcy of some players of the establishment, who have “ripped off” private investors often enough with their stock market games and have been called “locusts” by the former vice-chancellor Franz Müntefering, was a goal of the viral call to “Buy Gamestop Shares”.

What does that have to do with us Trade-Republic-customers?

Especially on these two days, on which the hedge funds had to buy up Gamestop-shares, Trade Republic on the German side and the US-pendant “Robinhood” on the American side switched off their customers from the trade.

Private small investors still were able to sell – but not to buy anymore!

Trade-Republic-board Christian Hecker made the following statement to the magazine Spiegel-Online:

“We want to protect our customers.”

It further says that shares that rose fastly, can also fall fastly again.

“The actions of Trade Republic were neither acceptable nor understandable”

We, being outsiders, cannot know how truthful Trade Republic is with us customers. The broker sent a letter of apology to all customers on the 3rd of February 2021:

A special week has passed by, in which we had to deal with a unique situation of shares, like GameStop or AMC.

If you were affected by the buy-stop of these shares, we want to apologize personally to you. We did not make a job good. Below we will explain the reasons for our actions. We provide you with answers to many questions that you made.

Some of you were affronted by us. There were difficult decisions to be made in a special market. We did not explain our actions well. We bet around the bush. In the past days, many of you have contacted us with critique or comprehension. Thank you!

In this e-mail, nobody talks about protecting the customers, but now the excuse is technical problems of a sub-provider.

I do not want to judge how credible it is that exactly the Gamestop-share was affected and you could only sell, but no longer buy the share.

I do not want to imply that Trade Republic intervenes one-sidedly in the favor of the big players at the market, and picked up the story about technical problems and ask in the morning of the 3rd of February 2021:

How can you assure that if the short sellers of silver get into trouble that there are no technical problems again on your part or your partners that only allow the deal into one direction?

Immediately, I got an automized confirmation of entry and some hours later a message that my question was forwarded to a co-worker. I should receive an answer from him.

However, it did not arrive up to the moment of publication of this article. If it should arrive, I will report about it through the comments feature.

Will there be a Silver-Squeeze?

In the social media area, which was been the turbo for the Gamestop-squeeze, I was called to buy silver.

There is also a huge number of short positions for silver. This is the norm at gold and silver since many years.

The most famous book in German language, which has examined the price manipulations by the high finance within the precious metal sector, is “Geheime Goldpolitik” (secret gold politics) by Dimitri Speck (available at amazon.de). 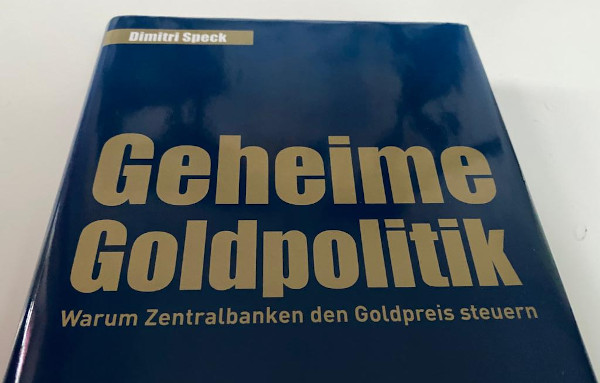 About 10 years ago, I had the pleasure of chauffeuring the author through Munich, wherein a very interesting conversation took place.

If again many private investors come together and each puts some silver into the securities account or even get it out of the market in the form of coins and bars, the price will rise and as a consequence, it will be very expensive for the short sellers to keep their short positions. Then some would start to buy silver too – to give the borrowed silver back – which will give the price increase an additional boost.

There is an interesting difference to the Gamestop-share

A company can get bankrupt and it really does not look good for Gamestop. Due to the lockdown, a lot of branch offices are closed and the online shop cannot compensate for it. Moreover, they are competitors of Amazon or the direct download at the game manufacturer.

If a company gets bankrupt, the share is worthless.

Being a shareholder myself, I have observed this several times.

Silver – in any case having it in the form of coins and bars – cannot get bankrupt.

It is always there. 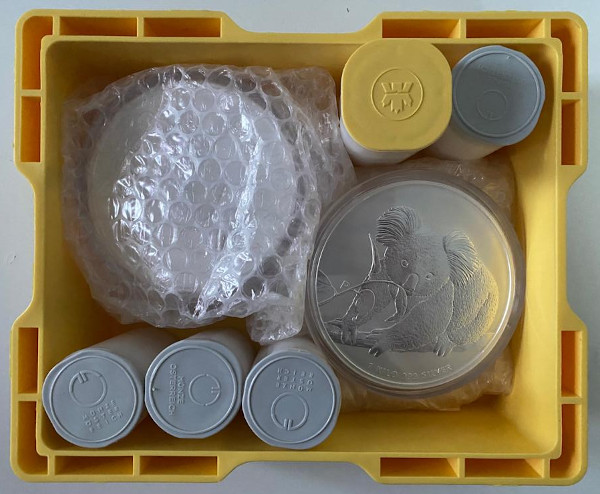 Silver-treasure of a family. Sending a “hearty thank you” to the north for allowing us the use of this picture!

When selling again, you always get money for it. However, the quantity depends on the day and buyer.

I have had silver coins in my hand that were 90 years old, and I would get the equivalent in Euros today, even if they changed the owner for “Reichsmark” or later “D-Mark” back then. 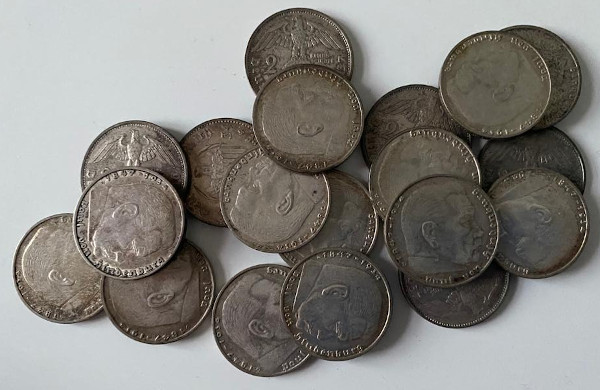 Circulating coins of “2 Reichsmark” from the 1930s: comparable with the todays Euros-2-coins, however with the difference that every coin contains 5 grams of fine silver. After the monetary reform, account balances and banknotes have been devalued a lot and have practically no value anymore. This is different with silver!

Of course, you can also buy silver at the stock market. A provider of 100 % physical silver is BullionVault. I have reported about it several times in our blog and in our Sunday mail.

Likewise, it is known that I am a strategic silver investor since 2009.

This is why I very gladly take the call to buy silver, because in contrast to the #gamestop-squeeze, it can be very comfortable in the mid or long term to have silver again. Our ancestors often called the silver ware, silver jewelry and silver coins their property – up to converting it into cash (selling it).

Buy a little silver independently from the #SilverSqueeze

Getting rid of silver as circulating coins and decade long information that silver is a relic from the overcome past, cause the loss of interest in silver of many people.

Besides the fact that I have made good investments in silver since long, I have logged into my Bitcoin-account and have made a profit for the first time since more than 6.5 years(!):

Can you imagine keeping silver for some years? I have been rewarded for it very well at Bitcoin.

I will invest this money and a little more from two share sales into the new purchase of silver.

Whether I will be correct doing so, no one can guarantee. However, I like the chances. 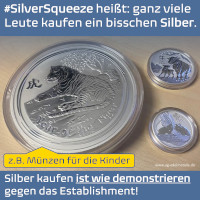 Moreover, I have read that buying silver is a bit like a substitute for demonstrating against the establishment.

Well, demonstrating is a good thing in democracy, right?

When buying silver, you do not even have to leave your house and therefore you do not have risks of getting hit by penalty payments in the context of different lockdown actions.

If you enter “silver” in the search bar, you receive suggestions …

I am looking forward to the exchange with our smart community using the comments feature. For this smart and profit-bringing exchange I am very thankful!

What do you think of it?

Supplementing articles of this special portal:

Yes, this is also possible, of course. You can buy shares, ETFs and derivatives of silver through Trade Republic.

Click on the yellow implementation button, get the free account and check out your possibilities through the search feature!