In this article, you will learn:

Perhaps you want to start with this video summary? (subtitle in English)

I have made test-withdrawals in Bosnian Tuzla on the 22nd of August 2015 with the by myself currently most observed bank cards – in a subjective view, the best credit cards that you can get in Germany at the moment. Here the evaluation:

Extrapolation to a withdrawal amount of BAM 1,000:

The currency in the Balkan state of Bosnia and Herzegovina is called “Konvertibilna Marka” (convertible mark) or short “KM”, international financial term “BAM”. It is divided in 100 Fening. Doesn´t this remind you a lot of our German Mark and our Pfennige?

That is true and intentionally!

In preparation of my Bosnia trip, I read on Wikipedia that the KM was coupled one to one to the DM since the 22nd of June 1998. At that time, even DM banknotes were in regular circulation.

The coupling exists even today, however, to the Euro and at the then exchange rate of DM to EUR 1.95583.

In Bosnia and Herzegovina, we are dealing with a foreign currency, which has a fixed exchange rate.

Therefore, I was eager to know about the settlement of the cash withdrawals of our top banks.

Surprise:
Only the DKB abided by the official exchange rate

DKB-customers were not charged with surcharges of the exchange rate.

This was different at Number26 and Comdirect. Both banks charged their customers surcharges to the exchange rate. Officially and according to its statement, Number26 does not do that and refer that the MasterCard rate is taken one to one.

In this case, MasterCard has taken a “small shot” for itself. Well, the entering and processing also costs money at some point …

A glance at the Barclaycard

Outside of this test, I have also made a cash withdrawal using the Barclaycard New Visa. Lo and behold, Barclays also uses the official (authoritative) exchange rate of 1:1.95583.

However, this does not help Barclaycard customers a lot, as it always charges an foreign transaction fee of 1.99% on top.

This is completely omitted at the DKB and Comdirect when withdrawing cash. Number26 does not charge this either for cash withdrawals nor for card payments!

Therefore, Number26 is our favourite for card payments in foreign currencies.

Additionally, one receives a push message through the app to the Smartphone immediately after the card payment or cash withdrawal. However, only if (mobile) Internet is available at that time.

At the DKB and Comdirect, one can see the card transaction about 2–3 days later in the card settlement of the online banking.

Due to the honest exchange rate, the DKB is our clear test winner at cash withdrawing in Bosnia!

2. Which ATMs are recommendable?

In Bosnia, there is a high number of ATMs that are operated by the banks themselves … and not by Euronet, which has obtained quite a prominence in some Eastern European countries, because of their seductive screen displays and unfavourable exchange rates. 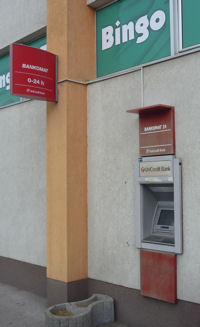 I have withdrawn cash at this ATM of UniCredit.

This should mean: Withdrawing money in Bosnia and Herzegovina is always fair at ATMs. There are some domestic banks or branches of well-known Austrian and Italian brands:

If you are not from the former Yugoslavia and own domestic bank cards, I recommend you to use ATMs of these four banks mentioned.

Background: Withdrawing at these ATMs is faster, because there are not so many screen queries. Sometimes, bank cards of other countries have other or even more features and therefore, there are more queries on the screen.

If you urgently need money and do not want to search for an ATM, you can, of course, choose an ATM of a local bank. During my visit in Tuzla, I have not found any ATM that did not offer the menu language German. English was available anyway.

3. Bring cash and exchange it on site?

Interestingly and just before departure to Bosnia on my home airport Memmingen, I met a woman, who told me that she always takes cash with her and exchanges it there in an exchange office.

On the other hand, her husband prefers to withdraw cash in Mark at the ATMs in Bosnia. 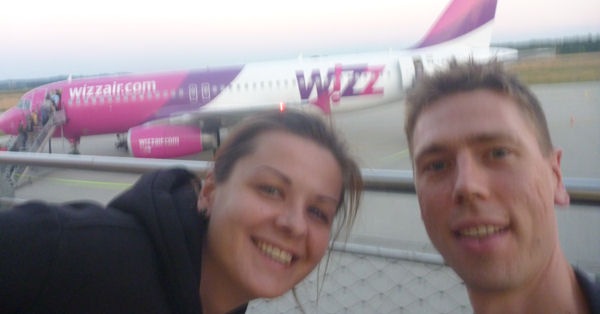 I love such “coincidence“ encounters like this one with Anessa before our departure in Memmingen, as they enlarge the mint and inspire – Thank you!

So, what is better?

The answer to this question was a sweet face and a shrug of her shoulders. So, I planned to test it myself.

In the city of Tuzla, there is an exchange office in the city centre, which is operated by the Nova Banka ad Bankja Luka.

I put Euros 10 on the counter and received KM 19.36. On the bill, I saw that it was exchanged precisely to the conversion rate of 1:1.95583 – minus a commission of Fening 20. This means that I only paid 10 cents for the service of the exchange office!

Usually, exchange offices earn through a commission (fee for the currency exchange) and through poor exchange rates, because an additional fee is hidden in the exchange rates.

This is different in Bosnia!

It has surprised me in a positive way.

Unfortunately, I could not find out more about exchanging money locally and the fees for larger amounts, as the only lady in the exchange office did not speak German and hardly any English. If anyone has experiences on this subject, then he/she is invited to share them with us using the comments box at the bottom of this page. 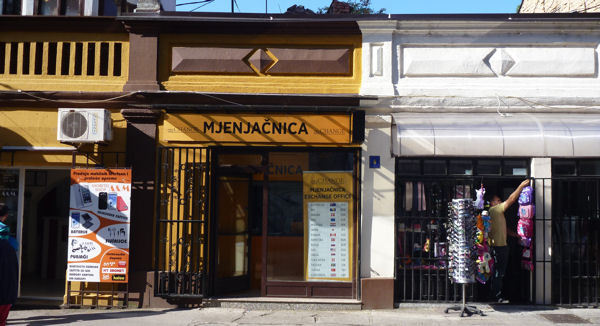 I continue to recommend the DKB Visa card for cash withdrawals. It was the test winner in our withdrawal test due to the best possible exchange rate. And if you use the DKB current account as a salary account, you probably have a credit line, so that the withdrawals are interest-free until the automatic monthly settlement.

If you do not have any of our recommended bank cards and are therefore probably a customer of the Sparkasse, a Volksbank or even of the Deutsche Bank, I recommend that you bring sufficient cash and exchange it in an exchange office on site.

I know of price lists of other banks that charge withdrawal fees of Euros 2.50 to 5.99. This is not appropriate anymore!

If your trip is soon, however, you still have at least two days until departure, you can even apply for the free MasterCard of Number26. Number26 is our vice-test-winner of the cash withdrawal and winner at the card payments.

It is the fastest-to-get prepaid credit card that I know, apart from the offers of gas stations or supermarkets, but they are not particularly recommendable because of their conditions.

Here you can see how you can get the free MasterCard on time.

The comments box is open for smart bank customers. 🙂

Further information about the tested providers