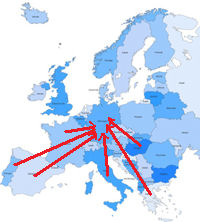 Completely unnoticed by the general public, German banks have become a popular investment destination for savings of “non-residents”.

A lot of money flows to Germany

In recent years, especially people from southern European countries became customers of German banks. They appreciate the security of the German banking system and, if choosing the right bank, also the complete exemption from fees of the bank account and credit card!

You have two options

Pre-note: Both options are 100 % legal!
However, please read the details!

… is the interest rate!

Exception: Countries that still have a wealth tax. As you can see in this table, there are only a few countries left: wealth taxes in Europe and the world.

In most countries, income and gains will be taxed at the capital (so no economically dubious substance taxation).

If you want to have a discreet bank account in Germany that you do not want to use for capital accumulation but as a secret emergency bank account for usage in a safe country, then you should make sure that the bank does not credit you with interest.

Implementation of the idea (solution)

The current account of the Comdirect Bank is free of charge and also interest-free. Thanks to the VISA Card (which is also free of charge), you can withdraw cash worldwide and tax free.

You can open a bank account via Internet and mail service from many countries, without having to visit Germany. This also applies to the option with the DKB.

The current account of the DKB currently bears interest. We are under discussion with the bank to install an option in the online banking system where customers can choose for themselves whether they want to receive the interest.

What happens if the interest rates are credited?

… then the capital will increase! This circumstance creates a tax liability according to the majority of the tax laws, even if one has generated the capital gains abroad (in our example Germany).

These interest rates are subject to taxation in the home country. In order to not pay double tax on the interest, you inform the German bank that you are a non-resident taxpayer (german). Here, you will find instructions and a sample letter for DKB customers: DKB bank account + Depot tax-exempt (german).

In order that one does not “forget” to make this declaration and therefore does not commit tax evasion – which sometimes ends in drastic penalties – all EU countries have agreed on the EU Savings Tax Directive in 2003.

It was published under the name “European Savings Tax Directive 2003/48/EG of the 3rd of June 2003”. To become effective, it had to be transposed into national law. Germany did that with the Interest Information Regulation (IIR).

As the bank account holder, you also get notified about the amount of interest credited by the bank. This one is stated in the Tax Return. During the processing of the tax return by the tax authorities, an information-pair is created and everything is ok!

The automatic transmission of information according to the EU Savings Directive only applies to citizens, who are tax residents in EU member states.

As long as there is no agreement at the state level between Germany/EU and further countries, there are also no automatic reports on bank account information and interest rate information in other countries. It is up to the bank account holder (without control reports decreed by the state) whether he declares his interest earnings or not.

Note: The bank secrecy in Germany has no special protection. This means that in justified cases – for example on requests by tax inspectors – German banks will provide the information.

Germany is not a haven for tax evaders! But using the right knowledge (that you will learn from this special portal), you can set up a discreet and completely legal foreign bank account in Germany. For this, pay attention to the interest-exemption.

The second option (capital gains + taxation in the home country, no tax payment required in Germany) is a bank account for the asset generation in Germany. How to employ a securities account will be the subject of another article.

Pages that may interest you