Which is the best month for banks?

In the yearly average, every fourth current account is in the red. In December, this value increases. More accounts are in the red and the amount per account is higher.

In general, especially the Sparkasse should rejoice; its average overdraft facility interest rate is at 10.47 per cent. At the current key interest rate of 0.0 per cent, this is a great return!

How you can earn money with the debt of other people, you can find out in the second part of the article.

Current conditions of “our banks”

Background knowledge about the Overdraft facility

The term overdraft facility is a word creation, which has colloquially established itself, because it describes this type of loan to the point:

For the overdraft, the path into the loan, one pays interest.

In the technical language, this is called overdraft loan or drawing credit or short overdraft. At business accounts, one speaks of the current account credit.

Agreement with the bank is necessary (overdraft facility)

Before one can overdraw the current account, one has to make a contractual agreement with the bank. Otherwise, the bank will block all money withdrawals that would go into the red.

Return debits (e.g. at the mobile contract) most often have bad consequences. This is why we recommend to our readers to always set up an overdrafe facility.

Recommendation: agree on an overdraft facility at the account opening or soon after.

At the DKB, an overdraft facility of Euros 500 as a standard (at a place of residence in Germany) is granted from the moment of account opening!

At the Comdirect and the ING-DiBa, the overdraft facility can be applied for directly with the account opening. Very practical. One gets an overdraft facility, although no salary was transferred yet and this is not even necessary at all.

But one must have a salary or pension payment. Banks generally do not grant loans to people without an income.

Overdraft facility is a loan

From the perspective of law, the overdraft facility is a loan with the usual rights and obligations that are in the Civil Law. In the past years, also the European Union has issued legislative texts concerning this subject and the customer receives thousands of words in the documentation and terms and conditions from the bank when concluding the contract.

The most important facts about the overdraft facility

Clever development of the overdraft facility

A special form of the overdraft facility is the credit line, as offered by the ING-DiBa. Herein, one can get a flexible credit line at a favourable interest rate, without a current account or having other accounts at that bank.

For people, who want to build credit lines strategically, this bank product is the first choice ► www.ing-diba.de/rahmenkredit

Advice: In 5–10 minutes, you can find out about the amount of credit line that you can expect ► www.ing-diba.de/rahmenkredit

Debt rescheduling of an overdraft facility

If you are not a customer at one of our relatively favourable direct banks mentioned above and live since some months in the overdraft facility, then it can really make sense to cleverly reschedule the debt.

… especially, if your loan interest is above 8 per cent!

One should not accept an overdraft facility above 8 per cent, was recommended by the magazine Finanztest in its August-issue. The interest difference to the key interest rate, the interest rate at which banks borrow money from the European Central Bank, is just too big.

For the debt rescheduling, we recommend to our readers to take ► this loan calculator, because it takes daily offers into account. Moreover, not every customer is welcome at every bank. But you, being an interested borrower, do not know, which bank wants to acquire which type of customer!

Enter the debt rescheduling amount of Euros 1,000 into the ► loan calculator. Sometimes – just as at the time of publishing this article – there are special offers of 0 per cent on Euros 1,000 or more favourable interest rates up to Euros 5,000. Attention: The term always has to be set to 36 months. 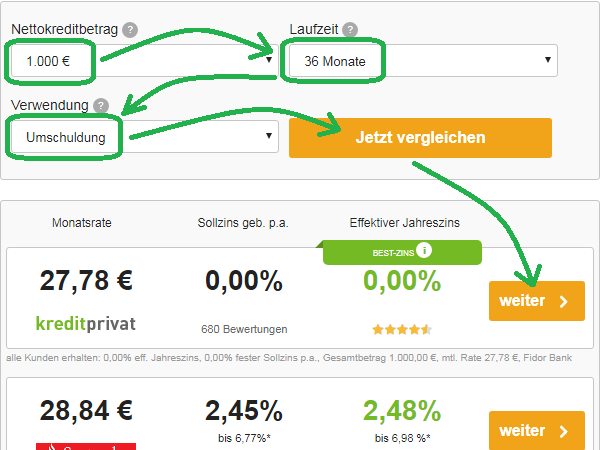 Please pay attention to not exploit the overdraft facility freed by the debt rescheduling again. You did not gain anything by doing so!

If you determine by reading this article that your overdraft facility is more expensive above-average or that it is above the absolute limit of 8 per cent recommended by the magazine Finanztest, then it can be meaningful to think about a current account switch. For this purpose, take a look at this article ► current account switch in spite of debt – smart solution developed.

… and you know that banks from our table above are willing to set up a high or at least initial credit line already at the account opening.

Questions, experiences and further solutions concerning overdraft facilities can be posted though the comments feature!

Bonus: Earn money with the debts of others

A question to the end: How do you deal with your Christmas purchases? Do you use your overdraft facility?

I am looking forward to your honest feedback. Many thanks. Also for your commitment through the comments feature and the recommending of our Sunday-articles!